Covid-19 Has Really Hurt Our Business. How Will My Bank React? 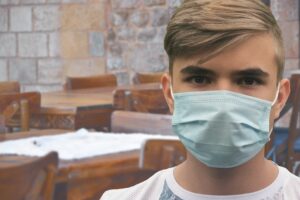 This is the sixth in a series of conversations between a financial consultant and trusted advisor named Jay and his clients and friends. The conversations deal with the misconceptions and misunderstandings between business owners and their bankers. I hope you find it helpful and entertaining.

“Well, it looks like the second quarter was quite a ride” Jay said through his surgeon’s mask, perusing a set of financial statements. “There’s a lot here to unpack.”

“That it has,” replied Edith Lazzeri Byrne, the owner of Buongiorno Distributors, from across a conference table.  “2020 has not been for the faint of heart.” She continued, adjusting her own mask.

Buongiorno had been Jay’s client for several years. He met with Edith and her Controller, Megan Wills every quarter to review the previous quarter and to help them set objectives for the next quarter.

“You’re right, Jay. The numbers are unusual. I do have some backup to explain the variances though,” Megan chimed in.

A troubling report for the bank

“We’ll look at that in a bit.” Jay said. “I’d first like to look at your first draft of the Borrowing Base Certificate for the line of credit.”

“Somehow we knew that’s where you would want to start.” Edith responded. Buongiorno’s bank required a quarterly report showing whether the company’s financial position complied with covenants set in the borrowing agreement. If they didn’t, the bank would have the right to make changes to the agreement or even cancel it.

Megan grimaced as she passed the two-page report across the table.  With a glance at the numbers Jay understood Megan’s reaction. Buongiorno was out of compliance on one covenant, although not by much and was dangerously close to missing a second.  “Hmmm…” Jay mused.

“Trouble?” Edith asked. “We had a big issue with the bank a year ago and I hate to be going down this road again.” (You can read about Edith’s earlier bank issues here.)

“Normally this would set off fireworks at the bank, but these aren’t normal times.” Jay responded. “It’s not good, but I’m not sure how bad it is. In any case, I think we need to get out in front of it with the bank.”

“Should we meet with Brian?” Edith asked. Brian McPherson was the loan officer on Buongiorno’s account.

‘I think that would be a good idea.” Jay replied. “Let’s talk about what that conversation might look like. We’ll have to show him the numbers, of course, but I think we also will want to include some discussion points about what’s gone on with the company during the pandemic.”

“So, the numbers and the story. Same as always.” Edith said with a wink.

Jay always stressed to his clients that when dealing with bankers and investors there are two components to any presentation, “the numbers and the story”. The numbers to Jay were the financial statements that laid out the company’s performance and financial position. The story provided context and included aspects of the company that weren’t readily apparent from the financial statements. The story would include the company’s market, competitive environment, growth potential, management strength and a host of other factors important to fully understanding the business.

Jay believed that, contrary to what some business owners believed, both were vitally important. Lenders and investors want to know more about a company than the numbers can possibly show.  Understanding the borrower drives their decisions.

Jay laughed and responded, “Absolutely, the numbers and the story. But this time I think the story might be more important than usual. Right now, almost nobody has great numbers.” Jay continued. “I think that bankers will focus more on the story because that will give them a better sense of which companies are really in trouble and which ones have experienced a temporary setback. In the first and second quarters most banks have significantly bolstered their reserves which means they expect a lot of write-offs of bad loans. If we can convince Brian that the bank has little risk of a write-off with Buongiorno, they will likely give you some flexibility on the covenant misses.”

“Ok, where to begin?” Edith asked.

“Let’s start with your sales.” Jay responded. “It looks like sales were down about 15% from last year through June. Where have you lost sales and where have you gained?”

“Well,” Edith answered. “As you know we serve three markets, independent restaurants, specialty grocers and on-line sales to individuals. Our big hit has come from our restaurant customers. We’re down almost 80%.”

“Yikes.” Jay exclaimed. “How much of your business is that?”

“That’s a bit lower than I would have expected.” Jay replied. “Restaurants used to be your biggest segment.”

Edith sighed deeply. “I started the business selling to restaurants. I grew up in the restaurant business in this town. A lot of my customers are family friends that I’ve known literally my whole life. It’s been very emotional for me to watch these people struggle. I’m afraid that several of them will go under.  Sit-down restaurants are barely scraping by. Delivery and carry-out haven’t come close to making up for the lost volume.”

Edith sighed again. “My family’s restaurants are struggling too. I had a long talk with Dad last Sunday night. They have had to spend all the money they had been saving for kitchen upgrades to stay in operation.” She shook her head sadly. “Two of our restaurants’ leases come up at the end of this year and Dad and Uncle Tony are thinking seriously about closing both so they can concentrate their resources on the other four.  Our restaurant at the Shoppes on State is one of the ones they might close. That hits me hard. I worked there weekends and summers all through high school and college. The old timers there are like family to me …….”

Edith drifted off for a second. “Anyway.” She said getting back to the subject at hand. “I’m guessing that we will lose somewhere between a third and half of that market permanently, or at least for the foreseeable future.”

Edith smiled. “With so many foodies stuck at home, our internet business is booming.  It seems that everyone is trying out new recipes and wants to use authentic ingredients. Online was half of our business last year and it’s up 15%. Even more exciting, over half of the increase has come from new customers, people who haven’t bought from us before.”

Megan laughed. “It seems like every time Bobby Flay cooks Italian on the Food Network; we get a spike in orders for Calabrian chiles.” She continued.  “Our internet sales would have grown faster than that if we hadn’t had trouble getting inventory.”

Edith shook her head. “Europe was shut down for about two months. Our suppliers got way behind on our orders and we started to stock out on some of our fast movers. “

“How did you deal with that? Jay asked.

Edith shook her head. “We did something I never saw us ever doing. We found domestic substitutes. I always defined the company as an importer and was fully prepared to stay true to 100% imported.”

“I know how committed you have been to imported products.” Jay replied. “It must have been a challenge to get your head around that significant a change.”

“You have no idea.” Edith said with a raised eyebrow. “Frankly, my staff had to drag me kicking and screaming over the hump. Megan, Paul, our buyer and Alyssa, our customer service lead came to me with a proposal to market domestic substitutes for our stocked-out products. Paul had found viable substitutes for most of the missing items.”

Edith continued. “They proposed that we offer substitutes on the website next to the originals with a “Good, Better, Best” rating based on how well we thought the substitute compared with the original. We beefed up our website to allow customers to evaluate the various options. We also added a chat board on the website where customers could compare notes on the various products.”

“And things just exploded”. Megan said excitedly. “We had dozens of entries rating the products every day and the chat board went crazy with customers sharing recipes and arguing over which products were best. We’ve never had this level of customer engagement”

“How long before the internet volume growth makes up for the loss in restaurant volume?” Jay inquired.

“Super.” Jay responded. “I think we have a story to tell Brian that he can sell to his superiors at the bank.”

“That’s encouraging.” Edith said, looking relieved. “How should we present this at the meeting?”

What to tell the bank

“Well,” Jay replied, “we will have to show the numbers, including the blown covenant. We also will want to show a graph laying out the overall line of credit usage for this year. With your reduced volume, I’m guessing your borrowing is down some.”

“That will help.” Jay said. “The reduced borrowing also reduces the bank’s risk level, and it shows the bank that you’re using the line properly.”

Jay continued. “We’ll want some exhibits showing the changes in volume by market and we’ll want an exhibit discussing the introduction of domestic products and the impact they’ve had on your sales and margins. We’ll need a forecast through 2022. Finally, I think we should propose that the bank either provide Buongiorno with forbearance on the current covenants or revise the covenants in accordance with the forecast. And I want them to make those changes with minimal fees.”

“Do you think the bank will go for that?” Edith inquired.

“I think it’s likely.” Jay replied. “The banks know that many customers will blow covenants in this environment. They will continue to work with the ones who recognize and attack their issues like you have. I also think it won’t hurt to have a sample tray of the new domestic products for Brian to sample.”

“We have an incredible new tapenade from California. You’ll need to try it.” Edith said with gleam in her eyes, fully aware of how much Jay hated olives.

“I think I’ll pass.” Jay chuckled. “Megan, if you have any questions on the materials we need, be sure to call me. Edith, let me know when Brian’s coming out so I can get it on my schedule.”

“Will do.” Edith replied. “And thanks Jay. I feel a whole lot more secure about this situation than I did.”

As Jay rose to leave, Edith handed him a small paper container. Bruschetta rounds, Jay’s favorite. “Now don’t eat them in your car, Jay.” Edith said. “You’ll get crumbs all over your blazer.”

“A risk I’m willing to take,” Jay replied as he headed out the door. “And thanks.”

Jeff Mann is a Partner and trusted advisor with B2B CFO® serving business owners in Northeastern Indiana and Northwestern Ohio who want to increase their cash and their company’s values. Contact him at jeffreymann@b2bcfo.com, or find a B2B CFO® Partner in your area at www.b2bcfo.com.