Is Your Banker Weird? Really? 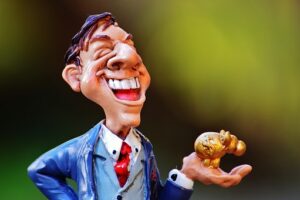 Many business owners have a distorted view of the bankers.

This is the first of a series of conversations between a financial consultant and trusted advisor named Jay and his clients and friends.  The conversations deal with the misconceptions and misunderstandings between business owners and their bankers.  I hope you find it helpful and entertaining.

Jay took an iced tea from the drink stand and found a seat at an empty table on the veranda overlooking the golf course. He didn’t play in many charity golf outings, but he never missed the one for Women’s Cancer Services. Jay served on the charity’s Board and always made sure to support their events.  A moment later Frank, a fellow Board member, joined him at the table.

Franklin Emerson III was a trim, dark-haired man in his mid-40’s. Earlier that year he had been named CEO of his family’s manufacturing business, following in his father’s and grandfather’s footsteps. Franklin Machine had never been a client of Jay’s but he and Frank had gotten to know each other through the Board’s quarterly dinner meetings.

“How did your group do, Frank?” Jay asked.

“I think we have a good chance to win.” Frank replied. “My group had Terry, from Pinnacle Plumbing. He hits the ball a mile you know, and we had Liz from Barker Realty. She went to State on a golf scholarship and it shows.  What a short game. How about you?”

“Don’t ask,” Jay said glumly. “We just didn’t have it today.” Jay brightened. “I saw in the paper that you guys got the exclusive supply contract for Mercer’s new line. That has to be huge for you.”

Frank beamed.  “Yes we did. Their new line comes out early next year. It’s a big deal for us, a 40% increase in business at least.” Jay nodded approvingly. Frank continued, “with that kind of increase we’re going to have to add a third production line. We have the space, thankfully, but we’ll be buying and installing a lot of equipment this fall.”  Frank hesitated for a moment and then asked, “Jay, do you do much work with banks?”

“A lot.” Jay responded. “Most of my clients have lending relationships and helping them to manage those relationships is an important part of my practice. Why?”

“Well, I’m kind of annoyed at my bank right now.” Frank said, his voice betraying a note of frustration.

“This expansion will require us to take on some pretty significant loans. When I laid things out for our bank, they didn’t seem to have any problems with it.  But then they sent over this application and information request that was way beyond anything we’ve ever had to give them. I thought Caroline, our new controller, was going to cry when I gave them to her. Hell, I thought I was going to cry. It’s going to be a huge amount of work and it rubbed me the wrong way.”

Jay leaned in to speak but Frank wasn’t finished. “I mean, we go back a long way with this bank, over 50 years. My grandfather played golf every Saturday with the Chairman of the bank for years. Now they hit us with this. It’s like they don’t trust us. I’m starting to wonder if they value our relationship at all.”

“Hmmm.” Jay said in acknowledgement, but Frank was on a roll. “Dad handled the bank right up until he retired. I’ve only been dealing with them for six months or so but I’m telling you I don’t understand them. They seem to have these weird priorities and they don’t think like the business people I know. It’s like they’re from a different planet. I don’t get it.” Frank frowned.

Jay shot Frank an understanding smile. “I hear you, Frank. And let me tell you, for the first half of my career I was right where you are. I didn’t get bankers, I didn’t think they understood business and I sometimes thought their ideas were sort of goofy.” Jay went on. “Then, about 20 years ago I was CFO for a company doing a huge refinancing. Our lawyer on that project was a real bright guy, Ivy League law degree and all. He also had worked for a big bank out on the East Coast for several years and really knew banking from the inside. He taught me a lot about the banking business and changed my mind about a lot of the things I believed. What he taught me helped me to be a better CFO and to have much more productive banking relationships.”

“Well,” Jay answered, “mainly that banking is a completely different business than the one I was in. It has its own rules, constraints, rewards and punishments. When you understand their environment, you see that the things bankers say and do make sense, in context.”

“Can you give me a for instance?” Frank asked.

Jay answered, “Let’s do this. I’m going to ask you a question but first let me set the scene. Let’s say that the Federal Government heavily regulates your industry.”

Jay nodded his agreement and continued, “and let’s say that the agencies that regulate your industry have the authority to come in at any time, unannounced, to review your financial information and the documentation that supports it. And let’s also say that if they aren’t convinced that your documentation supports your numbers, they can require you to change your financials and reduce your income.”

Frank let out a low whistle. Jay went on, “Now for the question; if you operated in that kind of environment, wouldn’t you take extra care to make sure your supporting documentation was squeaky clean?”

“You’d have to.” Frank responded.

“Well Frank, that’s where your bank lives.” Jay said. “The Comptroller of Currency, the FDIC and I don’t know who all else can come in unannounced, review their loan files, and if the examiners don’t think a loan has proper support, they can make the bank put a reserve on the books for it. And that reserve comes straight off the bottom line. Plus, the examiners don’t know or care about a borrower’s history with the bank. They need to be objective to do their job.”

“So,” Jay concluded, “Here’s your disconnect with the bank. You’re concerned that the bank’s request for more information signals that they don’t value your relationship. But in their eyes, they want the additional information because they do value it.  In their perfect world the bank examiner opens your loan file, sees that everything is in good order and moves onto the next file.”

“Then why don’t they just explain that to me?” Frank said with a tinge of irritation.

“I’m not going to let the banks off the hook entirely on this one.” Jay replied, “Sometimes they don’t explain their needs very well. And most of them don’t really comprehend how little most business owners know about banking. But, it’s not an easy conversation for them. You don’t whine to your customers about your business problems. Bankers don’t like to sound whiny and self-serving either.”

Jay continued, “What I’d do is have Caroline call your banker and see if they can use reports that she can generate out of your accounting system as stand-ins for the information they’re asking for. You might find they’re more flexible than you think.”

“I wish it was that easy,” Frank muttered.

“Well,” Frank replied, “our books are kind of a mess. We had a woman my grandfather hired, Evelyn, who did our books for about 30 years. For the last few years I’ve had concerns that the company had outgrown her skills, but Dad was so loyal, and she was such a good person that we didn’t do anything.

She retired right after Dad. So I went out and hired Caroline away from one of the regional auditing firms. She’s sharp as a tack and I think she’ll be really good, but right now she’s a little overwhelmed. She discovered that the situation was worse than I’d feared and that our financials for the last few years were pretty chaotic.  Evelyn wasn’t really an accountant and she made decisions on how to handle transactions that were just wrong. Caroline thinks that the bottom lines for those years are OK, but the numbers in the middle don’t make a lot of sense. She’s not comfortable giving them to the bank the way they are.”

Jay raised his eyebrows, “So you’re telling me that you have Caroline, who’s in a new company and industry, trying to run your financial function effectively, change the way you’re recording transactions and remediating your prior years’ financial statements. All at the same time. That’s a pretty tall order.”

“I know,” Frank replied. “She’s getting frustrated. Jay, is that something you might help us with?”

“It is,” said Jay. “What’s happened to your company is pretty common and I have helped several clients sort out their financial information.”

Frank thought for a moment and asked, “Do you have any time available next week that we can talk?”

“I try to keep my Friday afternoons open for conversations just like this.” Jay answered.

“Great,” said Frank. “Why don’t you drop by about 2:30. We can discuss this, maybe talk with Caroline for a bit. Then, let’s sneak out and see if we can get nine holes in before dinner.”

Jay smiled, “I like the way you think, Frank.”

For the business owner:

Jeff Mann is a Partner with B2B CFO® serving as a trusted advisor to business owners in Northeastern Indiana and Northwestern Ohio. Contact him at jeffreymann@b2bcfo.com, or find a Partner in your area at www.b2bcfo.com.