My Bank Wants to Take My Business. Don’t they? 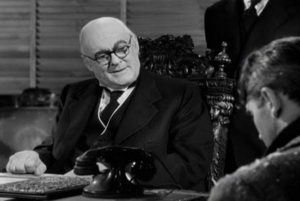 Some business owners see this guy as a typical banker. Lionel Barrymore as Mr. Potter in “It’s a Wonderful Life”. Public Domain

This is the fourth in a series of conversations between a financial consultant and trusted advisor named Jay and his clients and friends. The conversations deal with the misconceptions and misunderstandings between business owners and their bankers. I hope you find it helpful and entertaining.

Jay had just pulled away from the Starbucks drive through when his phone rang. Caller ID showed the call was coming from his client, McCarthy Distributors. He punched the Bluetooth button, “This is Jay”, he said.

“Hi Jay, its Lynette Stephens, I have a favor to ask.”

Lynette was McCarthy’s accounting manager. She often worked with Jay on financial projects for the company.

“Well,” Lynette responded, “Millie told me that you would be in next Wednesday for your quarterly review and I was wondering if you could bring something up in the meeting?”

“I’ll do what I can,” Jay replied, “What would you like me to mention?”

“I have an issue with my department,” Lynette said. “You know that we sell to a lot of small restaurants, usually with pretty small invoice dollars so we still get a ton of paper checks in payment. Because most of them write checks at the end of the week, we get a huge number of checks every Monday, several hundred sometimes. We don’t want uncashed checks sitting around overnight so we have this frantic push to apply all these checks and get them deposited by the end of the day.”

Lynette continued, “That means overtime every Monday and that’s causing me a problem because so many of my staff have young families. I’ve tried to hire a part-timer but its hard to get one who only wants to work on Mondays, and I don’t have enough work the other four days to justify hiring a full-time person.”

“That’s what I was thinking,” Lynette answered. “But when I brought it up, Ed was totally against it. In fact, he really got worked up over it.” Lynette replied.  “He said that he wasn’t letting those people handle his money first.”

“What, is he afraid the bank will try to take away his business?” Jay teased.

“He’s not being rational,” Lynette tried to explain. “I don’t get it.”

“Ed being emotional? Who would have thought? What about Millie?” Jay asked.

“She gets it, but I don’t think it’s a battle she wants to fight right now. But I have a morale problem growing in my department and I certainly don’t want to lose anyone over this.”

“OK,” Jay said. “I’ll mention it during our meeting, but no guarantees.”

Ed and Millicent “Millie” McCarthy had founded McCarthy Distributors 27 years before and the business had grown to become a major supplier of all kinds of restaurant supplies to restaurants and institutions with foodservice operations like schools and hospitals. From the earliest days of the business, Ed had directed the sales and warehouse operations while Millie ran the back office including finance, customer service, IT and purchasing.

The person who said that opposites attract had Ed and Millie in mind. It would be hard to find two people more opposite in appearance and temperament. Ed was short and stocky with a ruddy complexion and a shock of red hair that never seemed to stay combed. Millie was tall and slender, over six feet tall in heels with porcelain white skin and jet-black hair. Ed usually gave off a rumpled appearance, “like an unmade bed” his salespeople teased. Millie, on the other hand dressed stylishly, the picture of a senior executive.

The two were just as opposite in demeanor. Ed had a big personality and a ready smile. He was a natural salesman; friendly, aggressive and the center of attention in almost any gathering. People liked Ed and many in the company believed that Ed could call 10,000 people by their first names. He was also a “big picture guy”, never short on ideas and always ready to try something new.  Millie, on the other hand was quiet, measured, analytical, detail oriented and reserved.

When they first married some worried that the relationship wouldn’t last. Instead it thrived in large part because both Ed and Millie were very self-aware about their strengths and their weaknesses. Ed had learned early on that Millie’s caution often kept him from bad decisions that could arise from his exuberance. On her part, Millie understood that she needed Ed’s aggressiveness to help her overcome a tendency toward “paralysis by analysis.”

Finally, they were absolutely loyal to each other. So much so that when a leading trade magazine named Ed its “Executive of the Year”, Ed insisted that Millie get equal billing. The company’s board room featured a framed blow up of the magazine cover with Millie looking elegant in a black suit and red scarf and with Ed looking uncomfortable in a suit he admitted he only wore to funerals. Jay glanced at the picture as Ed wrapped up the quarterly review meeting.

“Well, that about does it.” Ed said brightly. “Another solid quarter.”

“Agreed,” Jay responded. “I’m especially pleased that you’re getting the productivity boost you forecasted for the new packing stations in the warehouse.”

Ed beamed. “Well, do we have anything else to cover?” he inquired.

“I do have one other item.” Jay said. “I had a conversation with Lynette last week. She’s got some morale issues in her department because of the huge influx of checks you get on Mondays. Your bank offers a lock-box service. I’m wondering if that won’t solve your problem.”

“NO!” Ed snapped. “I’ll never let those SOB’s get their hands on my money first.”

“What’s your problem with the bank?” Jay queried. “It’s not like they’re trying to take over your business.”

Jay turned to Millie and declared, “I think you ought to skip watching It’s a Wonderful Life this Christmas.

“Everybody does,” Jay answered. “But the Lionel Barrymore character, Mr. Potter, isn’t a prototypical banker, at least not like the ones I’ve known.”

“Actually,” Jay continued, “banks don’t take over businesses. The laws pretty much make that impossible and they hate having to repossess someone’s assets. Its no fun and they almost always lose a chunk of change disposing of them. They generally try to dispose of any assets as soon as they can. They operate by the principle that cash in-hand today beats the promise of more cash next week.”

“I’m not convinced,” Ed replied. “It would be easy for a bank to own a business indirectly.”

“OK Ed,” Jay replied. “What are some of the businesses around here that the banks own indirectly. You’re well enough connected to know.”

Ed fumed but said nothing.

Jay took a different tack. “And Ed, can you name a company that a bank has driven out of business just to get their assets.”

“What about Simmons Corp.” Ed responded. “That’s what Roger Simmons told me.”

Jay smiled. “Ed, for one thing, that was 15 years ago. For another, I was a CFO then and Simmons owed us a lot of money too. We ended up on the creditors committee and got a good inside look at that situation. I promise you, the banks weren’t the villains. Roger ran that company into the ground. If anything, the banks should have pulled the plug sooner.”

“I’m still not buying it Jay.” Ed retorted. “And now I’m ticked at Lynette. I’ll bet she’s in cahoots with the bank and will get a big payoff when they get hold of my company.”

Jay stared at Ed incredulously. Suddenly, Ed‘s eyes widened and he leaned far back in his chair. Looking to his right, Jay saw Millie. She was standing with her palms on the table leaning toward Ed with fire in her eyes. Her face had turned an eerie shade of red as she focused her fury on Ed.

“You take that BACK, Edwin McCarthy.” She spat, her voice shaking with rage. “What a horrible thing to say. Lynette is the most loyal employee we’ve ever had. She would do ANYTHING for us.”

Jay had heard stories about Millie’s occasional bursts of temper. The real thing lived up to its billing. Across the table Ed shrank in his chair, almost as if he hoped to disappear under the table. After a few tense moments, Ed took a deep breath, slowly sat up in his chair and said in a contrite voice, “You’re right Mil. That was a terrible thing to say. I shouldn’t have said it. I’m sorry.”

Millie slowly sank back into her chair, the red draining from her face. After a few moments of silence, she spoke calmly with a voice that gave no indication of how angry she had been only moments before.

“Ed, I don’t understand your issue.” Millie said. “I’ve run the company’s banking relationship for 27 years and to me it seems like things operate pretty much the way Jay says they do.”

Ed sat silently, grasping for a graceful escape. After a moment he said, “OK Mil, you and Lynette do what you think is best. You know a lot more about banking than I do. I shouldn’t get out of my lane.”  His eyes brightened and with a sly smile he continued, “Besides, listening to your advice has made me a wealthy man Mrs. McCarthy.”

Millie scrunched her nose and replied, “You can dial back the Blarney any time Mr. McCarthy.”

Millie looked over her glasses and rolled her eyes but couldn’t totally suppress her own smile. Ed had a singular ability to make Millie feel good about herself. She never could stay mad at him for long.

“Well,” Ed asked, “Anything else? If not, we’ll get back together in three months.”

As Jay passed by the accounting office on his way out Lynette shot him a questioning look. Jay winked and gave her a thumbs up as he stepped into the lobby.